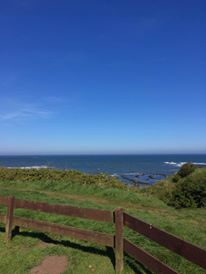 For the last 29 years, the majority of my holiday memories centre around one amazing place, Berwick Upon Tweed. During those years, there is only one holiday park that will do for me, Berwick holiday centre.

As you will see from the picture above, it is located next to beautiful clifftops with a stunning view of the sea, as well as access to 2 beaches.  It is also a 10 minute walk to the town centre which has gorgeous walks around the town walls or by the river Tweed, but for this post I will focus on the park and what it has to offer.

We arrived at the park on May 1st for a few days, Monday - Friday.  I am not sure who was more excited, me or the kids!!  My mum and dad were already at the caravan, which was 2 minutes from the main complex yet in a quiet area. It really was perfect.  After getting settled and unpacked it was time to explore,

On our first night there we ate at the Brigs of Tweed restaurant.  We had a main course each, the kids selecting from the children's menu, and a drink each and it came in at just over £30.  When you see the size of the portions you wonder if you will manage to eat it all.  The meals were beautiful. 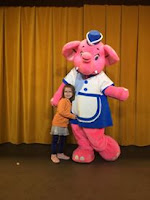 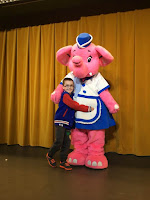 Our first full day was full on.  We started off with time in the pool, which was so refreshing on a hot day.  We then took the kids to the Experimental show.  As you may have guessed, this is based on science and is interactive.  The first experiment was to make a paper plane, aerodynamics, which also involved a race to see whose plane went the furthest.  The next experiment was based on light and with the use of special glasses, you could see the rainbow of colours that make up the bulbs we use.  It was pretty cool, yes I did give it a try!!  My husband stayed with our son for the pop up puppet show, which was about bullying and how to deal with it. A very important message delivered in a fun way.  Later that night we went to the showbar for Go Live with the Funstars. Liam was invited up on stage to take part in a sports quiz.  His team, the Yellow team, won and both him and his opponent received a sticker and window sticker.....I just came to say yyeellooowwww. 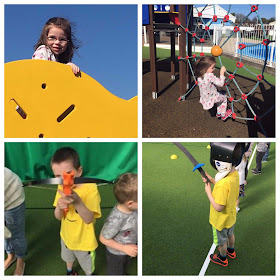 The next day, Liam was signed up for fencing and archery sessions.  He absolutely loves taking part in new activities.  Sophie decided she wanted to play in the park for an hour whilst her brother was doing, in her words, "boys things". We then went to messy morning where the kids made paper jellyfish! After lunch it was a trip to the minor injuries unit with Sophie after she bumped her head after falling.  She was fine but was not allowed to go swimming or take part in much until the next day.  Kids sure know how to scare you!! 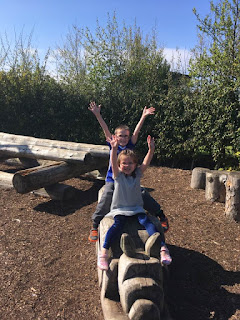 Our last full day consisted of making masks and costumes with recycled materials, interactive story time and an afternoon spent in the pool.. Later that night and Liam was back on stage telling his best joke which won him another sticker and window sticker.  We played some of the machines in the amusements and traded the tickets we won for toys and sweets at the ticket kiosk.  After playing in the park and the soft play we took part in the quiz with the funstars which included them playing massive jenga. 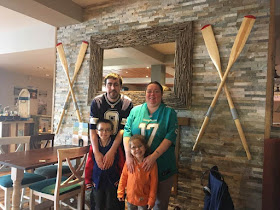 On the morning we left we went to breakfast in the restaurant and DJ Ned came in to see everyone and cause some mayhem too.

After loads of tears and tantrums, and that was just me, we got on the train home.  I always hate leaving Berwick,  It really is my happy place and one that has so many wonderful memories.  I really hope to get back there again next year.